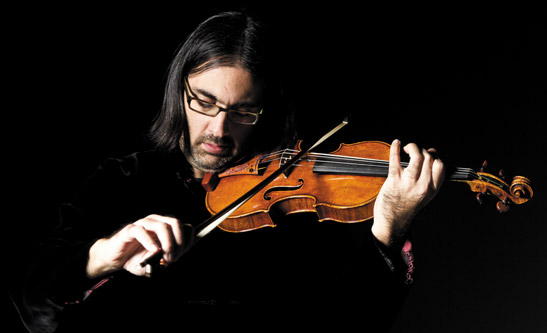 Leonidas Kavakos begins his 2014/15 residency with the Royal Concertgebouw Orchestra in August. The residency opens on 25 August with a European festival tour under the direction of Chief Conductor, Mariss Jansons, during which Kavakos will play Brahms Violin Concerto and Wolfgang Rihm Lichtes Spiel.

Kavakos performs Brahms at venues including the Concertgebouw, Amsterdam (25 August) and Berliner Philharmonie (6 September), and the Rihm at the Edinburgh Festival, at the Usher Hall on 28 August, and KKL Lucerne (5 September). Two of the concerts are being live streamed online: on 25 August here, and on 29 August, from Köln on 29 August, here.

Kavakos has appeared regularly with the Concertgebouw Orchestra, most recently touring to the US with Jansons, performing the Bartók Violin Concerto, reviewed here at the Kennedy Center in Washington: “… a golden tone and an easy command of this concerto’s challenges that matched the intense insouciance of Jansons’s approach. Kavakos brought fire aplenty to the skitterings of the final movement… but the urbane restraint he brought to the second movement was even more notable” (Washington Post, February 2013).

The residency, which also involves chamber performances and masterclasses, includes concerts with Daniele Gatti (Berg Violin Concerto) in December and with Valery Gergiev (Shostakovich Violin Concerto No.1 in A minor, Op.99) in April.