Leonidas performs Sibelius Violin Concerto in D minor in the Berliner Philharmoniker’s Europakonzert 2015 at the Megaron Concert Hall, Athens, conducted by Sir Simon Rattle on 1 May 2015. Kavakos regularly performs the concerto, and his 1991 recording with Osmo Vänskä and the Lahti Symphony Orchestra won the Gramophone Award for Concerto of the Year.

Every year on 1 May since 1991, the orchestra has given a concert live on TV in a different European city of cultural significance, to commemorate the anniversary of the orchestra’s founding in 1882. Leonidas is a regular soloist and long-standing friend of the Berliner Philharmoniker and this year the Europakonzert brings them together in his home city of Athens.

Watch and listen to the concert live and after the broadcast:
Digital Concert Hall

Whilst preparing for the concert, Leonidas recently performed at the Acropolis Museum – watch him play in this historic space here. 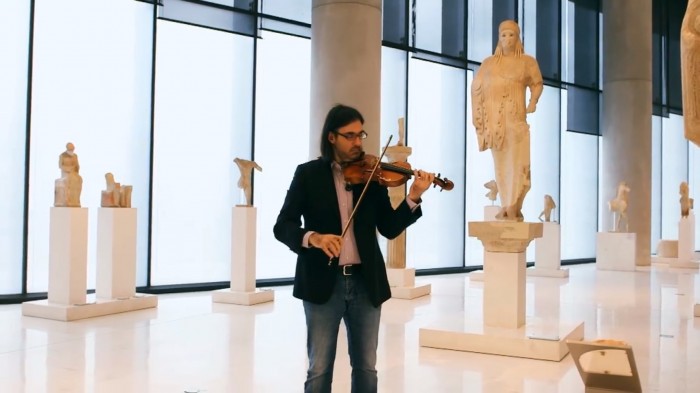 In January and February this year, Leonidas performed the Sibelius with Berliner Philharmoniker and Sir Simon Rattle, as part of the orchestra’s residency at London’s Barbican Hall. The concerts received universal acclaim, with Leonidas described as “the mesmerising soloist” (Times) performing with “diabolical fire and crystalline ice” (Observer).

The sold-out performances were recorded for the BBC and for the Berliner Philharmonie’s Digital Concert Hall. Read the reviews below:

“… few violinists have more experience to bring to the Sibelius concerto than Leonidas Kavakos. His range of expression and the general daring of his account were compelling, and needed to be matched by Rattle’s alert accompaniment.”
Guardian (US edition)