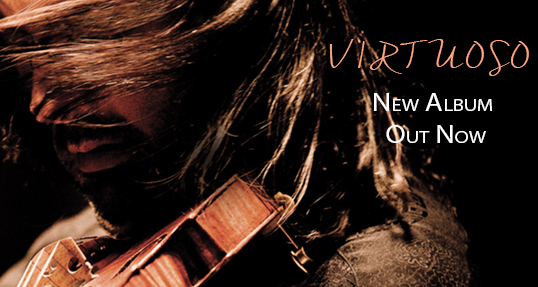 Leonidas Kavakos releases his latest recording on Decca Classics, Virtuoso, on 1 April 2016. The recording presents some of the most characterful and demanding violin works ever written for the instrument, paired with a selection of beautiful and lyrical ‘encores’.

Speaking to The Strad, Kavakos described his motivation for the disc:

“After recording the Beethoven and Brahms violin sonatas, which is rather heavy repertoire, I wanted to present something that contained a greater variety of different styles and that focused on the violin as an expressive instrument. There exists an amazing amount of treasure in the form of short violin pieces that are strongly indicative of a particular place, and that contain a distinct local colour. Many of these works are based on folk music or are derived from operas or dances, and some are transcriptions of works written for other instruments. They offer a completely different experience compared to a big concerto or violin sonata, both of which generally follow the same structure and concept, and develop along similar lines.

I was looking for pieces that to the best of my knowledge have never – or rarely ever – been recorded: works like Britten’s Reveille, Donányi’s Gypsy Andante from Ruralia Hungarica, and Strauss’s arrangement of the Waltzes from Der Rosenkavalier. Each has its own character and sound world, and very individual sources of inspiration coming from different countries. This is something that I love about Europe in general – that within such a compact geographical area you have so much variety of inspiration – all these pieces sound completely different to one another, from de Falla’s The Three Cornered Hat to Stravinsky’s Russian Dance.

Many of the pieces on this recording were either composed by or in collaboration with a violinist. The violin transcription by Ruggiero Ricci of Francisco Tárrega’s Recuerdos de la Alhambra for classical guitar is something I’ve played many times as an encore. I knew of Ricci as a legend when I was growing up, and met him for the first time at the Paganini Competition. He had recently recorded his own arrangement of Paganini’s La Campanella, and when I met him I said I had his recording but could not find the music. He looked at me and said, ‘Let me look at your hand’, so I showed him my hand and he said, ‘OK I will send it to you’. I knew him for many years, and when we had the chance to speak about the transcription – and I told him I had begun to play it – he was very pleased.”