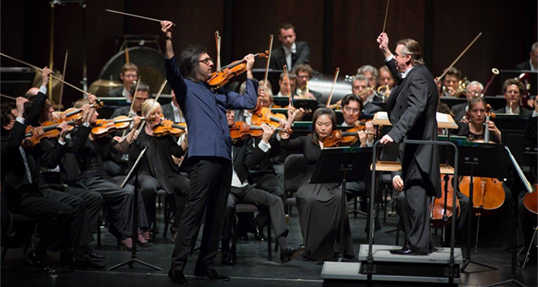 Leonidas joined Mariss Jansons and the Bavarian Radio Symphony Orchestra on a tour of North America at the beginning of April. Leonidas played the Korngold Violin Concerto in concerts in Washington DC, Ann Arbor, Montréal and at New York’s Carnegie Hall.

Here is a round-up of reviews from the tour:

“Leonidas Kavakos, a commanding presence onstage, made light of every violinistic difficulty thrown his way and, happily, performed the work straightforwardly, choosing not to layer sweetness on sweetness.
As a palate-cleansing encore, Mr. Kavakos offered the Gavotte en Rondeau from Bach’s Solo Partita No.3, adding playful little turns and slides that seemed left over from the Korngold.”
New York Times

“Under the bow of the guest performer Leonidas Kavakos, roundness yielded to the attack and precision. Varying the speed with intensity and in perfect communion with the conductor, he laid on a sound just like his phrasing, flawlessly delivered with such a tenderness and great panache.”
Journal de Quebec

“Kavakos had everything under control with ultimate nobility, in a concerto with many dangerous moments”
Le Devoir

“A rich, warm tone in his violin’s middle and lower registers and extraordinarily immaculate intonation in the work’s many stratospheric passages.”
CVNC

“Played with intense tone and an apt balance of clarity and romance.”
National Post