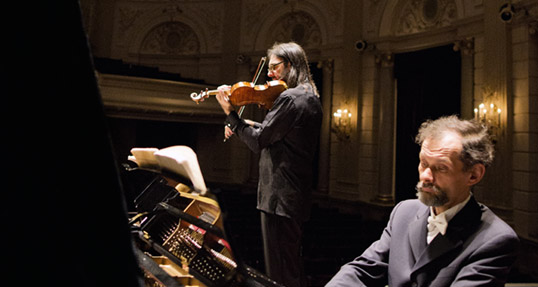 Leonidas Kavakos makes his Beijing debut on 22 June at the National Centre for Performing Arts. He will perform a recital with long-standing recital partner, pianist Enrico Pace.

Kavakos and Pace have performed together for many years including this season, which they began with a recital at the Lugano Musica festival in October. In February the duo performed recitals in Italy and Spain, and in May they performed the complete cycle of Beethoven sonatas for violin and piano in three concerts at the Dresden Music Festival, in the Palais im Großen Garten.

Leonidas Kavakos is an exclusive recording artist on Decca Classics, which began with a recording of the Beethoven sonatas with Enrico Pace.

His latest release, also featuring Pace, was released in April: Virtuoso presents some of the most characterful and demanding violin works ever written for the instrument, paired with a selection of beautiful and lyrical ‘encores’.

“These show-stopping virtuoso pieces push the violin (not to mention violinist) to the absolute limit, something the excellent soloist Leonidas Kavakos handles, and revels in, brilliantly.”
Gramophone, May 2016

“The unrivaled elegance and beauty of Leonidas Kavakos’s sound would be reason enough to embark with him on a traversal of the complete Beethoven sonatas for violin and piano, but it’s the probing musicianship he and the excellent pianist Enrico Pace bring to it that make the ride so thrilling. The conversations, arguments and flirtations between violin and piano that Beethoven writes into these sonatas are all rendered with spirit and impeccable taste.”
New York Times, December 2013

Despite previous performances in China, including recitals in Shanghai Concert Hall with Enrico Pace, this recital will mark the first performance by Kavakos in the country’s capital city.

Kavakos travels on to Shanghai to perform Brahms Violin Concerto with the Shanghai Symphony and Christoph Eschenbach on 25 June.