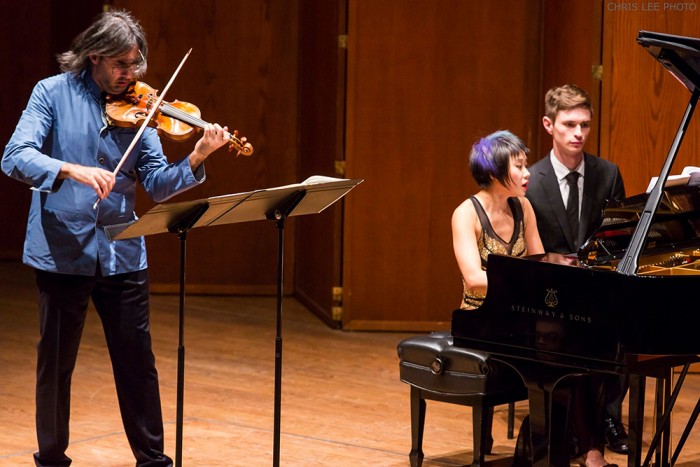 Leonidas’ recital tour with Yuja Wang came to a close on 13 February with a performance at Santa Barbara’s Granada Theater. The tour began last month with a performance in Turin and also visited cities across Europe and the United States, including Paris, Düsseldorf, Madrid, Washington, New York and Seattle.

The duo’s performances were greeted with widespread critical acclaim throughout the tour:

“An evening of the highest-level music making… one of the grand events of the season.”
Washington Post

“Kavakos’ tone has the character of striking high-grade silver sinew, ever beautiful, graceful and unbreakable, the ideal sound for Schubertean lyricism… In the Debussy, Wang emphasized the grave gorgeousness of the French composer’s harmonies, while Kavakos spun ever more exquisite silver.”
Los Angeles Times

“[Kavakos’] jaw-dropping virtuosity combined with a keen, probing musical insight… Kavakos and Wang dispensed with those difficulties and took us on a profound musical journey… I’ve never heard a performance so compelling and so illuminating, and the audience members who stayed were also clearly moved, judging from the whoops and standing ovation that burst out when Bartók’s musical roller coaster slammed to a halt.”
San Diego Union-Tribune

“[Kavakos] enchanted with a sensitive sound… an experience of perfect harmony between piano and violin.”
Süddeutsche Zeitung

“When two personalities complement each other so well, one can only applaud.”
Res Musica

“The violinist Leonidas Kavakos and the pianist Yuja Wang were celebrated with bravos at their concert in Tonhalle… a great evening. Wang was superb. And Kavakos throws breathtaking colours to the audience.”
RP Online