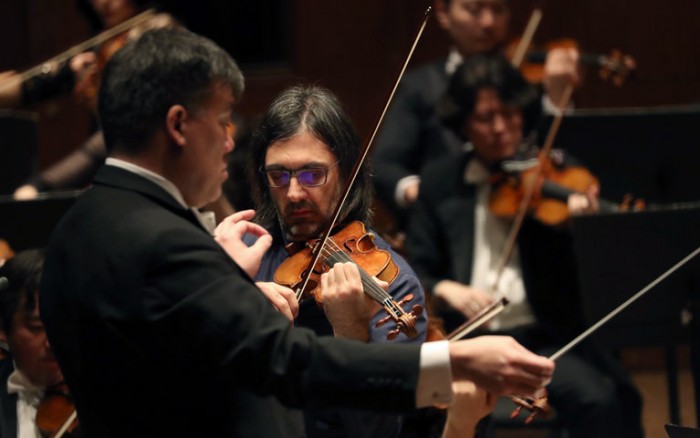 Leonidas continued his season-long residency with the New York Philharmonic on 1 March with the world premiere of NYx: Fractured Dreams, a new violin concerto by Lera Auerbach. The concerto was written for Leonidas, and he and Auerbach preceded the performance with a talk on 28 February discussing the challenges and rewards of creating a new work, and the journey towards giving a world premiere. The New York Times praised Leonidas’ “riveting” performance of the new concerto, with Bachtrack praising his “elusive violin lines weaving their way through this ethereal patchwork”, while New York Classical Review also commented:

“Leonidas Kavakos was a master of temperament and mood in the solo role, a participant rather than a self-conscious star. His tight interactions with other musicians — quasi-duets with the musical saw (played by Dale Stuckenbruck), an extended pizzicato repartee with the entire string section — were as impressive as the variety and force he achieved in cadenzas and other solos.”

Leonidas’ residency began with four concerts in October, which also marked his conducting debut with the orchestra, and has also included a recital with Yuja Wang and a Young People’s Concert. He gives four more concerts with the orchestra in May performing Brahms Violin Concerto.