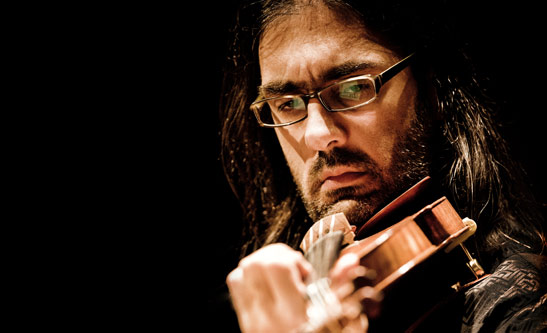 Leonidas Kavakos is recognised across the world as a violinist and artist of rare quality, acclaimed for his matchless technique, his captivating artistry and his superb musicianship as well as for the integrity of his playing. He works with the world’s greatest orchestras and conductors and plays as recitalist in the world’s premier recital halls and festivals. He is an exclusive recording artist with Sony Classical.

The three important mentors in his life have been Stelios Kafantaris, Josef Gingold, and Ferenc Rados, with whom he still works. By the age of 21, Leonidas Kavakos had already won three major competitions: the Sibelius Competition in 1985, and the Paganini and Naumburg competitions in 1988. This success led to him recording the original Sibelius Violin Concerto (1903/4), the first recording of this work in history, and which won Gramophone Concerto of the Year Award in 1991.

Kavakos is now an exclusive recording artist with Sony Classics. His latest recording, to be released worldwide in October 2019 in anticipation of the 250th anniversary of Beethoven’s birth in 2020, is the Beethoven Concerto which he conducted and played with the Bavarian Radio Symphony Orchestra, coupled with the Beethoven Septet played with members of the orchestra. In the anniversary year, Kavakos will both play and play/conduct the Beethoven concerto with orchestras across Europe and the USA. He will also play the complete Beethoven Sonata cycle in Shanghai and Guangzhou, Milan and Rome, and a number of single Beethoven recitals in various cities including London’s Wigmore Hall, Barcelona, Parma and Copenhagen.

In 2007, for his recording of the complete Beethoven Sonatas with Enrico Pace, Kavakos was named Echo Klassik Instrumentalist of the year. In 2014, Kavakos was awarded Gramophone Artist of the Year.

August 2019 was a full and rewarding month: after the Verbier Festival where he appeared in recital with Evgent Kissin and conducted the Verbier Festival Chamber Orchestra in a programme in which he played Mozart’s Sinfonia Concertante with Antoine Tamestit, he joined YoYo Ma and Emanuel Ax at the Tanglewood Music Festival for a programme of Beethoven Piano trios, in a duo recital with Ax of Beethoven Sonatas, and in an orchestral concert with the Boston Symphony in which he played and conducted Beethoven’s Violin Concerto and Dvorak Symphony No. 7.

In the 2019/20 season, in addition to concerts with major orchestras in Europe and the United States, Leonidas Kavakos will one again join YoYo Ma and Emanuel Ax for three programmes in Carngie Hall comprising Beethoven trios and sonatas. He will undertake two Asian tours, first as soloist with the Singapore Symphony and Seoul Philharmonic and in recital in the NCPA Beijing, and then in the spring he performs with the Hong Kong Philharmonic and Taiwan National Symphony Orchestra, prior to playing Beethoven Sonata Cycles in Shanghai and Guangzhou with Enrico Pace.

Born and brought up in a musical family in Athens, Kavakos curates an annual violin and chamber-music masterclass in Athens, which attracts violinists and ensembles from all over the world and reflects his deep commitment to the handing on of musical knowledge and traditions. Part of this tradition is the art of violin and bow-making, which Kavakos regards as a great mystery and to this day, an undisclosed secret. He plays the ‘Willemotte’ Stradivarius violin of 1734 and owns modern violins made by F. Leonhard, S.P. Greiner, E. Haahti and D. Bagué.